Here is a July update.  Some stuff fun, some stuff not so fun.  Fun stuff first!

So, we got to go up to the lake house and go swimming!  Then, I had my 25th Month Ampuversary.  Hooray!  That was on July 14.  Then the Hairless Pup had her BIG ONE.  Then the day after that, Little Miss Perfect had her 7th birthday.  Here are some pictures! 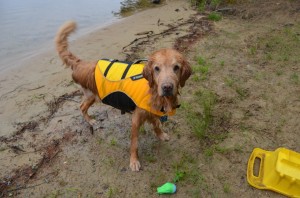 I sure did have a bigger butt when I had 4 legs. 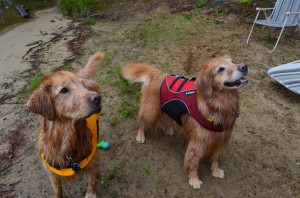 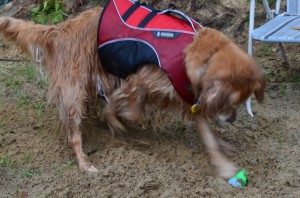 Lola just likes to dig in the sand.  She is not a strong swimmer. 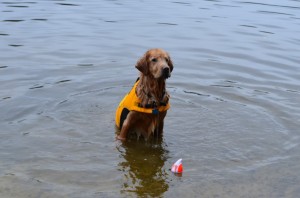 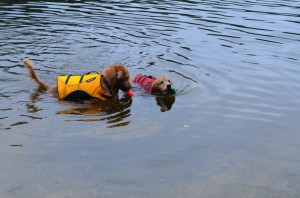 Lola….She’s always getting in my way.

Here’s the official family photo for the Hairless Pup’s one year birthday: 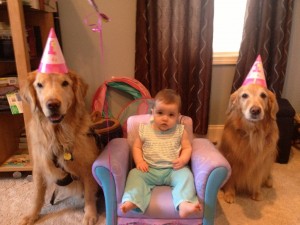 Notice how WE have hats on and The HP does NOT.  She cried and cried when they tried to put the hat on her.  Did we cry???  Nooooo, we were good dogs.  But The HP did NOT get any cheese after either.  So HUH!

They had a big shin-dig at home for The HP, and Lola & I were ‘quarantined to the comforts of upstairs.’  Or at least that was the spin they put on it for us.  I suspect the plates of chicken wings and chocolate cake downstairs might have been the cause for keeping us upstairs.  I do have a history with chocolate cake, oh so many years ago.  I can still taste the sticky gooey frosting in my jowls.  (Right before they made me puke it all up.)

And….Little Miss Perfect turned 7.  Hmmmph.  I tried to photo bomb her, but it doesn’t look like I was too successful. 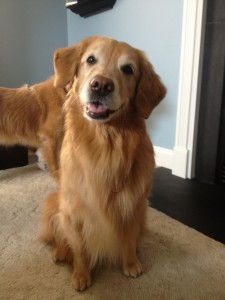 Momma says Lola went and had a “spa day” for her birthday.  She can’t fool me, I know what happened to her because Lola came back smelling all flowery and showing me her Brazilian.  Momma says I got out of going, because I can’t stand on a grooming table with 3 legs and they give me a bath here at home every 3 weeks because of my skin allergies anyway.  I guess there are some perks…and doG knows, I don’t need a Brazilian.

OK , so here is the not so fun stuff:  I had my very last chemo treatment (I suppose that’s good stuff, depending on how you look at it.)  I have developed a “cough” and I have developed a limp in my front right leg.  I am not feeling like a spring chicken at the moment.  Momma and Dada have upped their fuss factor over me.  I can’t even take a pee in peace.  Of course, I guess I never did, now that I think about it.

Also we have a had a few emails inquiring about some of my treatments.  Here is a link to the mushroom stuff I’m on:

So that is it for now.  Until next time…keep on keepin’ on.

Yeah!  Back to back milestones baby!  Butchey Hudson here.  Hope everyone in the New England area survived the earthquake last night.  Momma says I am not a good watchdog because I didn’t even stir on the couch when the shaking started.  Well what did I know, it sounded like that hairless pup ripping those big belches like she does.

Anyway – Yup, last Sunday I celebrated my 16 month ampuversary and then on Monday, I turned 8 years old!!!  Momma and Dada went to some big place called Ikea and got me three of my very favorite soccer balls.  I love them!  I have them in all 3 colors, black, blue and red.  Momma said my old ones were getting much too gross.  She calls them “slobber sponges”.  They had been washed, and sewed at the Stuffectomy Triage Center too many times.    Here is a picture of me with my new red one. 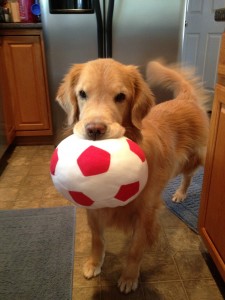 Momma says I like to suckle them.  She has a funny nick-name for me when I chill out on the couch with them, but she says that the name is inappropriate to be repeated here on Tripawds.com.  I’m not sure what inappropriate means…because I like to smell butts.  I guess humans think that is inappropriate, too.

I really really really love my soccer balls and I can’t go to bed without at least one of them.  But sometimes I like to take other toys to bed.  I really like big stuffed things.  Last Easter, Momma got me Big Blue Bunny.  He spends a LOT of time in Stuffectomy Triage, but he has it coming.  Him and those big floppy ears of his, he is just asking for me to rip them off!  Now, I have a little reminder for all you folks with Tripawds.  Sometimes we need help getting up the stairs with our big toys.  Of course, I can easily get up the stairs with my soccer balls.  But Big Blue Bunny is big, and I have tripped going up the stairs when I drag him up to go to bed.  So I have learned to whine at the bottom of the stairs and either Momma or Dada will come back downstairs and carry him up the stairs for me.  I am not sure why they don’t carry him up in their mouths like I do.  Must be because they have those thumbs.  Sometimes I wish I had thumbs…but whining does work. 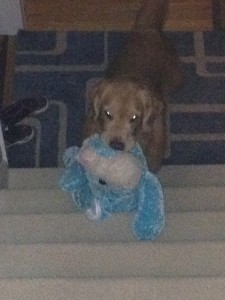 So what else…Oh Yeah.  So my Auntie from Virginia came up to see ME, and I suppose Lola and the hairless pup, too.  But she brought my cousin Charlie with her.  (Big grumbling sigh).  Momma says I was not on my best behavior.  In fact, she says I was very rude to him.  Well in my defense, he came in here with MY Auntie and then he tried to play with Lola.  She is MY sister.  MINE.  He even posed for this picture with the hairless pup.  The nerve!

So I fixed his butt.  Or at least I tried to.  I tried to start a fight with him, but he wouldn’t partake.  So I woofed at him, and then I dropped to the floor like my 1 back leg went out from underneath me.  I figured everyone would think he was a bad boy and knocked the 3 legged dog with cancer to the ground.  But he scooted off too quickly when I feigned my fall, and I think everyone was onto my clever ruse.

Momma wants me to mention that I am taking a new mushroom product to fight my cancer.  I’ve been on it for about 3 weeks now.  It is called I’m Yunity.  There was a study released by U Penn in September I think.  The study was done on 15 dogs with splenic hemangiosarcoma and had very good results.  The mushroom is specifically Coriolus versicolor.  The press release link is here, and the study link is here.  She says we will keep posting in the blog about how I am doing with it.

Well that is it for now!  Remember to keep those Halloween chocolate candies away from all your dogs when it is trick or treat time soon.  Did somebody say TREAT????!!!!